I first became awakened to and appreciative of the mystery, power, and beauty of the Stations of the Cross when I worked on a seminary research paper on the life of Franciscan Antonio Margil de Jesus, an early missionary of Texas, born in Valencia, Spain, in 1657. Antonio Margil founded the San Jose and San Miguel de Aguayo missions in what is now known as the city of San Antonio (St. Anthony), Texas. He had a humble opinion of himself and a high reverence for God. He closed all of his letters with the signature, “El Nada Mismo,” or “Nothingness Itself.”

Antonio de Margil traveled to San Antonio from Mexico City on seven occasions on barefoot. He began each day with an early morning devotion of the Stations of the Cross, developed in large part by the Catholic Order he belonged to, the Franciscans. The Holy Week passion of Christ served to strengthen and encourage Margil on his arduous missionary journeys through the rough terrain and the dangers he encountered along the way.

As a Wesleyan Christian, my main source of spiritual devotion is scripture, so I used the 14 Stations of the Cross based on scripture. Over the next five days of the Holy Week, I’ll post three Way of the Cross scriptures on Monday, Tuesday, Wednesday, and Thursday and two scriptures on Good Friday, bringing our total scriptures to 14. I’ll also include personal devotions and prayers.

My hope is that you will grow in Christ’s love and take on holy courage this Holy Week as you meditate and draw from the love and courage of Christ, “though he was in the form of God, did not regard equality with God as something to be exploited, but emptied himself, taking the form of a slave, being born in human likeness. And being found in human form, he humbled himself and became obedient to the point of death– even death on a cross.” (Philippians 2:6-8)

The First Station: Jesus on the Mount of Olives

The Second Station: Judas betrays Jesus with a Kiss

While he was still speaking, suddenly a crowd came, and the one called Judas, one of the twelve was leading them. He approached Jesus to kiss him; but Jesus said to him, “Judas, is it with a kiss that you are betraying the Son of Man?” 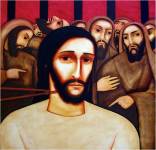 When the day came, the assembly of the elders of the people, both chief priests and scribes, gathered together, and they brought him to their council. They said, “If you are the Messiah, tell us.” He replied, “If I tell you, you will not believe; and if I question you, you will not answer. But from now on the Son of Man will be seated at the right hand of the power of God.” All of them asked, “Are you, then, the Son of God?” He said to them, “You say that I am.” Then they said, “What further testimony do we need? We have heard it ourselves from his lips!”

Reflection: There come times in our lives when we have to put our desires and fears aside and commend ourselves and our lives to God with trust. Jesus prayed to God for another way to accomplish the mission other than going through the way of humiliation, suffering, and death. The words of Jesus’ prayer, “Not my will but yours be done,” consoles and strengthens Jesus to accept the journey ahead and the long night of the soul he would endure. There were times when Jesus could have opted out of his predicament by giving an answer that would exonerate him or by pleading for his life before his accusers, but he did not because of his obedience to the will of God and his trust in God’s ultimate deliverance.

Loving God, as we follow our Lord Jesus Christ on the way through the Via Dolorosa this Holy Week, we stand amazed and challenged by Jesus’ commitment to your redemptive mission in the world and his willingness to lay aside his human interests for your purposes. Show us your vision and hopes for our broken, divided, and warring world. Show us the way in which you would have us seek to carry out your holy and just vision on earth as it is in heaven and set our hearts and faces like flint toward your vision. Give us your strength each day, each hour, each moment. Help us in our weakness and moments of fear and assure us of your abiding presence and love that never forsakes us. Amen.